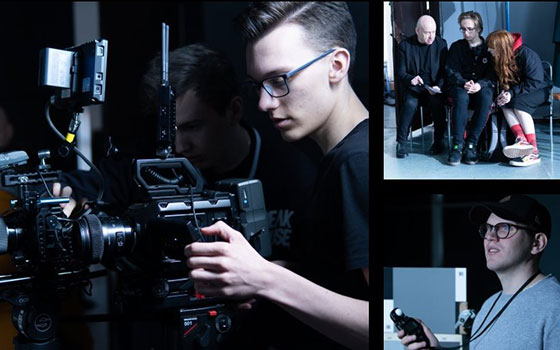 The educational program at the department of Film and Photography
Academy of Film, Art and Design

The education program at the Film and Photography Department assumes that a film maker must have the skills to transfer the screenplay to the screen in accordance with the director's concept.

In order to present the screen play in a proper way, the film maker should have the required theoretical knowledge and have mastered all the practical aspects of the film production. This should cover, in particular, areas related to lighting, composition, camera operation, character portraits, direction, work with the actor, the ability to stage scenes, creation of atmosphere, stage design, forming black and white and colour image space and other areas that may result from the individual requirements of each film production.

Courses at the Film and Photography Department cover subjects such as: art, cinematography technology, the basics of working with a camera, stage design, the basics of direction and editing, digital image: visual effects and animation, colour correction, documentary film and reportage, photography, sound engineering and editing, and other complementary subjects, including: organization of film and tv production, selected issues related to short films, cultural anthropology, art history, film and literature, visual arts, selected issues of copyright law, foreign language classes and others.

The candidate may choose a specialty subject from a discipline that is his / her individual interest.

Particular attention is paid to film and photographic practical work, giving the opportunity to learn and shape the creative sensitivity of students. Cooperation in groups is organized to enable the transfer of workshop skills, which can be achieved mainly through practical activities.

Individual film etudes boil down to the production of original films in full consultation with the teacher, at every stage of implementation. Thanks to this method, all elements of the production workshop will be included in the context of a specific narrative.

The university has an Etiud Production Studio equipped with modern photographic, lighting and sound equipment necessary for didactics and for the implementation of film and photographic projects, which are a key element required for promotion after each year of study.

After submitting the theoretical written work and film etude, the graduate obtains a master's degree in art.

WE INVITE YOU TO THE DEPARTMENT OF FILM AND PHOTOGRAPHY